Doctor Syn is one of the railway’s two Canadian Pacific-style locomotives, built in 1931 by the Yorkshire Engine Co., the other being Winston Churchill and has an identical history of design and build (see details here).

Named Black Prince on delivery, Number 10 changed name shortly after the war when Number 9 was re-named Winston Churchill (for obvious patriotic reasons and for display at an exhibition in Canada) and Howey knew that the line could not be without a Dr Syn (a local fictional hero of smuggling stories).

Alterations during the 1980’s included — chimney raised and copper-capped, both domes raised, a bell, and a headlight — to give this popular engine a very American appearance. A major overhaul completed in 2014 saw her sport some yellow paint touches, a novelty on a Romney loco. 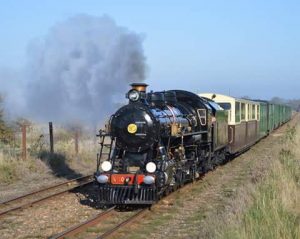