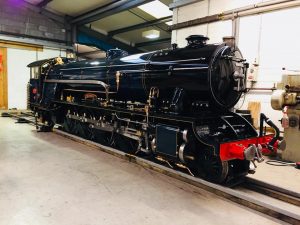 Samson was delivered to the railway on 20th July 1927, the identical twin of Hercules. These two locomotives were designed — by Henry Greenly — and ordered to cope with the anticipated ballast traffic that the line hoped to transport. She fell victim to it’s failure to materialise and her own inability to negotiate the points and crossings in use on the railway at the time.

Between the years 1931 and 1946 she remained un-used. Rusting away in the yard, she was raided for spares. 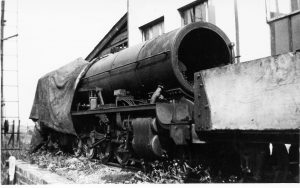 After the war, Samson was sent to Hove for a re-build and then in 1961 she received a superheated boiler.

In 1973, she was involved in a fatal accident with a stolen car at a level crossing at Dymchurch and sent to Leeds for repair, returning the following year. This accident led to the installation of flashing warning lights being installed at road crossings on the railway.

From 1955, Samson appeared in a lined black livery, but she received a red coat of paint whilst she was used at the 1984 Garden Festival in Liverpool. This livery remained until a 1989 repaint, when she emerged in a dark blue similar to that of the former Great Eastern Region. Her whistle is an American Crosby Chime.

In the early part of May 1996, Samson became the fifth Romney loco to travel up to the Ravenglass and Eskdale Railway for a few days work on that fine line.

Along with Hercules, Samson runs with a high capacity tender. 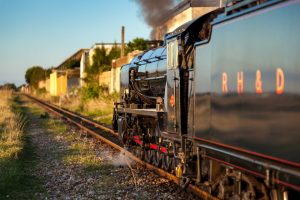